This is a guest post from CRF President Milton Jones’ blog, Through Orange Colored Glasses.

There is no other way to describe the Ring Road Orphan’s Day School except for a light in the darkness. When you walk through the dreariness of the Nyalenda slum in Kisumu, there is a sense of poverty, disease, and filthiness that is reflected in the lack of color. In other words, the slum is dirt colored and rather dark. But as you wind your way through the maze of paths that some would call roads, you finally arrive at the Ring Road complex. The most striki 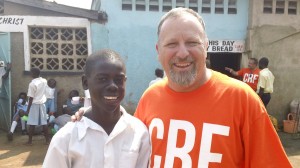 ng aspect about it is the bright turquoise color that absolutely sets itself off from the rest of the slum. And the color is simply symbolic that this place is truly a light in the darkness.

Outsiders have not always seen the Ring Road school as a bright place. In fact, it is hard to believe that it has survived. I can remember when the school building was not even there. I can recall getting on my knees and praying over this piece of land with Jared Odhiambo and Shawn Tyler as we hoped that there would someday be a school building here. And then it was built. It appeared that our dreams had come true. But the government didn’t share our vision. The stigma of AIDS orphans overpowered the objective reality of what they could actually do. Our kids were called “stupid.” The powers that be tried to shut us down. There was always one more hoop to jump through to keep the doors open. We were told our building wasn’t good enough. So floors were changed. We were told our building wasn’t secure enough. So a fence was added. We were told our school was unsanitary. So new latrines emerged. But the ultimate argument was always that our children were not smart enough.

In order to shut down the school, the government was going to prove their point by making our children take a standardized achievement test. This would finally give the measurable proof of our children’s lack of knowledge. Or so they thought. When all was said and done, they didn’t know about Elvis. Elvis in the world of Ring Road is as legendary to us as the Elvis of Graceland. Yes, Elvis scored the highest score in the country. And he saved the school. The very people who tried to shut down our school had to accredit it because it was now a fact—our children were smart. They only had to be given a chance.

But was the Elvis story some kind of a fluke or a once in a lifetime tale? No, our children just keep getting smarter. Mick Davis, who helps with the training and encouragement of children at Ring Road, explained to me that students there are now testing in the top 1% of the entire country. And can you imagine what they could do if they had a library or a lab? What could they do if they had all the same things that other students take for granted in their education? I can’t even imagine what the students would accomplish if they had better resources. How do they do it? It is the gratitude that they have for being given a chance. It is the esteem that they have because they know that some sponsor out there believes in them.

And when you look at things today, it keeps getting better and better. For instance, there is Oscar. He seemed to have so many strikes against him. His only option for education was a school designed for AIDS orphans. His life was a history of abuse, and he had the burns to prove it. But you would never know of his pain. He wears the biggest smile at Ring Road. And his bright countenance is even overshadowed by his bright mind. Our students just took the preliminary part of the national achievement test again. To say that Oscar did well is an understatement. Oscar scored twenty points higher than the highest score ever recorded. One could say that Oscar is the smartest child in the country. You would never know it when you walked around Ring Road. His beautiful smile and spirit simply blend into the glory of the atmosphere reflected between the turquoise buildings. Oscar’s story is a story of resilience. It shows what God can do with a child who is given a chance. The possibilities can’t be measured.

In a new book called Africa: Altered States, Ordinary Miracles, we encounter a very good question—“How can a continent so fluent in famine, genocide and torture so consistently serve up irrepressible optimism and undying hope?”