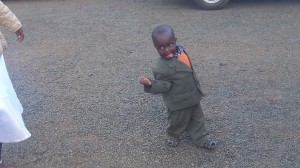 What a gift! I can’t remember receiving something nicer. I will always cherish it and remember where it came from.

It seemed like the whole thing was a big mistake. I was a little upset about it and quite a bit embarrassed too. On a previous trip to Kenya, I met a man named Lawrence. He asked me if we could start a child sponsorship program through CRF at his locale. He had a lot of poverty and orphans at his place. At the time, I had too many children to sponsor in our other works near Kisumu—so I told him that maybe we could do it at some time in the future. Well, the time came when I thought that we could add some children in that area, and I told Barbie to contact our workers at Kisumu to do the due diligence needed to start the new program. James Were was very excited about this new work because it was being developed on property that he had donated in Miguena. In fact, it was at his old house. So we got our newest work going. After we got it started and I had already sponsored children there, I realized that the Lawrence whom they had been talking to and was now leading our newest program was a different Lawrence than the one I had communicated with previously.

I went to our newest program not knowing exactly what to expect. What I found were some of the sweetest children I have ever met. And they were poor—so poor. And they were orphans. Some of them had been orphaned so recently that their parents had yet to be buried. The ones taking care of the children with Lawrence were all widows. Some had been widowed because of AIDS and now were being given a chance not only to survive themselves but also to have a purpose. This was truly a James 1:27 kind of place. And Lawrence was one of the best storytellers I’ve ever heard. He would call child after child before us and tell of their sad tale that led to their becoming an orphan. Our team was full of tears. And I saw how God had moved in the strangest way to get us to this place.

The orphans there presented a little program to us. And at the end of their singing and sharing, Lawrence presented me a gift. It was incredible. The hand carved plaque was made of beautiful wood and stained and painted in exquisite fashion. On one side was a map of Kenya. On the other side was a map of Africa. On both sides it said “Christian Relief Fund.” And at the central point was the word “Hope.” This was no ordinary gift. They had spent a considerable amount of money. When they were questioned about why they didn’t spend the money on food, Lawrence said, “Didn’t you read the story of the woman with the alabaster jar? She wanted to give her best.” I didn’t really need this gift. In fact they had given a great gift to someone who didn’t need it. But even though I didn’t need it, I have never been more thankful for a gift. I think I realized what God feels. He doesn’t need our gifts, but when we give Him gifts—He is so thankful and pleased.

I experienced another similar event today. As I was worshiping with my brothers and sisters at the Kipkaren church in Eldoret, Francis Bii pointed to the bottle of wine that they were going to use in communion. Francis smiled his big smile and told me of the story of the wine. There was a free trip that was going to be given last year for someone from Eldoret to be able to go to Israel. Francis was selected. When he went to Cana of Galilee, he acquired a special bottle of wine that was considered to be holy since it was the site of where Jesus turned water into wine. Francis was not aware that he could not take the wine and was stopped at customs because of it. For some reason, Francis got to keep it. What a valuable possession this bottle of wine was! It simply could not be bought or acquired. Yet Francis had a bottle of it. And he opened and shared it with all of us from America to celebrate the Lord’s Supper. It was another gift of the best.

Francis always teaches the church that there is always someone needier than you. At the Kipkaren church they take up their regular contribution and then they have another basket where they give money to help widows. I think this is very biblical but seldom practiced. I understand giving to the poor. But what I have learned is that those of us who are rich still need to receive. It is very humbling and yet extremely gracious when the poor give to the rich. It makes me thankful. Will I give more? Will I bless them in return? I’m sure I will, but that is not the point I’m making here. I think that along the way of my wealthy life, I have forgotten my own neediness. And it is only through the gift of one who has to really sacrifice to give that I discover my own poverty of spirit. And thus I am blessed.

(The picture doesn’t have to do anything with the blog. It is Francis’ youngest son. I simply love this kid and this picture).

We Plant Churches Too!